The different tiers can be installed on different computers. You can have multiple instances of any of the components (though usually not on the same computer): multiple clients, multiple servers, and multiple database servers.
Here’s a simple installation with two SQL Server database computers, each associated with a single Microsoft Dynamics NAV Server computer, each of which in turn supports two Microsoft Dynamics NAV RoleTailored clients: 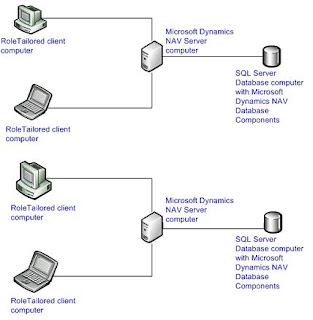